All out  of boo's and I don't mean booze!

You gotta love the Aussies! 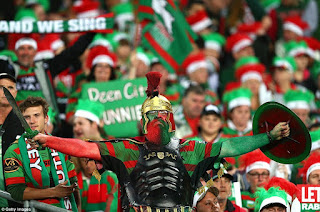 Recently I was watching a game in the N.R.L. where my local team were playing a match. At almost every opportunity the crowd would jeer and boo when any one on the opposition got the ball. Later on towards the end the commentator said, "Well it sounds like the crowd are all out of boo's!"

As hilarious as the comment was, it got me to thinking. Why do people boo?

"When they boo you, you know they mean you". George Halas
Gladiatorial games were introduced to Rome in 264 BC, when the sons of Junius Brutus honoured their father by matching three pairs of gladiators. 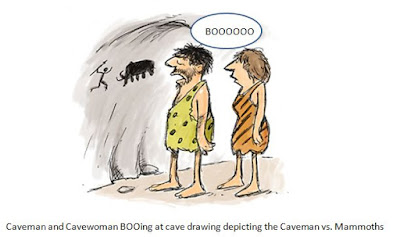 In 65 BC, Julius Caesar commemorated his father, who had died twenty years before, with a display of 320 pairs of gladiators in silvered armor.
Most matches employed a senior referee (and boy do they get a good booing at every game). We know the practice was used frequently in theses games in the crowd voting process as to whether a gladiator lived or was put to death, so its connotation is to derive displeasure with an outcome. Audience participation often determined whether a competitor lived or died. The crowd decided by booing or cheering  the wounded gladiator
by yelling 'missum' or 'mitte' (release or send away) as a gesture of mercy and conversely yelling 'iugula' (to kill).

When the democratic reformer Cleisthenes came to power in the sixth century B.C., audience participation came to be regarded as a civic duty.
The audience applauded to show its approval and shouted and whistled to show displeasure.

Historically, there is lots of conjecture and myth in its regard, however it appears an old English word boo was first used in the early 19th century to describe the lowing sound that cattle make. Later in the 1800s, the word came to be used to describe the disapproving cry of crowds.

Hoot, another onomatopoeic English word, was used as early as 1225 to describe the same phenomenon. Ancient Greek and Latin both contain words resembling boo that mean "to cry or shout aloud."

"A boo is a lot louder than a cheer. If you have 10 people cheering and one person booing, all you hear is the booing". Lance Armstrong

Back to todays usage!. It is regularly seen on the news as a negative reaction to politicians speeches, sports players, poor performances and outcomes, but almost guaranteed whenever Australians play sport, and an odds favourite whenever the National team plays superior opposition. Booing has become an art form for many, but is it as effective as its counterpart, "cheering and applauding", in terms of affirmation and encouragement? I think not!

Nice to see your home fans boo you! Thats what loyalty is all about" - Wayne Rooney 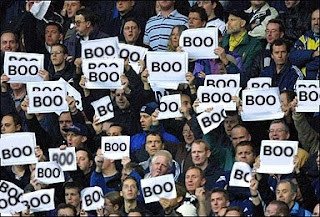 Human nature responds to encouragement and affirmation, and has been said " One can't strengthen the weak by weakening the strong.

Bosses, leaders and team members will always get more superior outcomes in the long term by using terms of empowerment, than a means of degradation or disapproval.
There is nothing more disappointing than living in a negative environment. It saps creativity, persistence and consistency. It demoralizes both the initiator and those in its environment, so whilst in the right environment, an appropriately delivered boo can be funny, encouraging and a true consensus of the crowds feeling.

"Studying cows, pigs and chickens can help an actor develop his character. There are a lot of things I learned from animals. One was that they couldn't hiss or boo me." -James Dean

Does it change the course of a game?
Elect or depose a candidate?
Determine whether someone lives or dies?

Well who really knows, certainly in the game I was watching, No!

The outcome was a resounding victory to the opposition, but it didn't stop the crowd booing the victors off the pitch........... 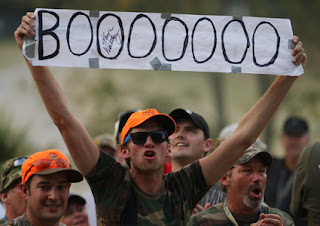