It’s that time of year again, when everyone evaluates the past year and resolves to “do better” in the coming one! Really? 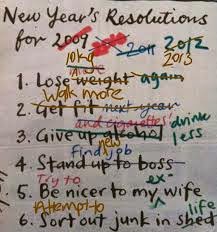 If only life were as uncomplicated as that. It isn’t. In fact, if we lived alone on a mountain top devoid of any people inclusion, we would still get into trouble. Its human nature to “self-destruct”, it just happens that the process expedites with others present. Oh for the quiet life!

Making new year resolutions are a unique way of listing ones failures, Sure we do fail, but why make a list for the whole world to see and evaluate that failure. I mean, it’s not as if we “plan to fail”. Ask Anthony Robbins! I have a complete set of his videos which I purchased in 2002, which are still unopened. According to my local online auction site, so do 178 other people also.

New Year’s Day celebrations began in pre-Christian times, beginning with the Babylonians in March but changed to January by the Romans. January gets its name from Janus, the two-faced god who looks backwards into the old year and forwards into the new. Janus was also the patron and protector of arches (Ianus in Latin), gates, doors, doorways, endings and beginnings. He was also the patron of bridges seen on the bridge Ponte Fabricio which crosses the Tiber River in Rome to Tiber Island, where it survives from its original construction in 62 BC during the time of Julius Caesar. 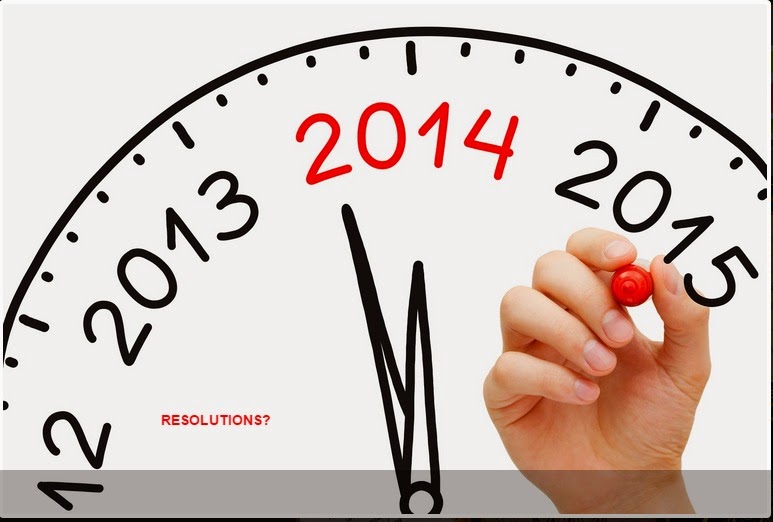 Even today it is believed that if you touch the Janus head as you cross the bridge, it will bring good fortune.

So why are we set on pursuing the annual pilgrimage into this propensity for change?
Are we so discontent with that which we are, that self-betterment eases the sting of failure?

Now I am all for progressive change, and self-betterment. Not to impress others, but because I personally desire it.

The custom of setting “New Year’s resolutions” began during this period in Rome, as they made such resolutions with a moral flavor: mostly to be good to others. But when the Roman Empire took Christianity as its official state religion in the 4th century, these moral intentions were replaced by prayers and fasting. 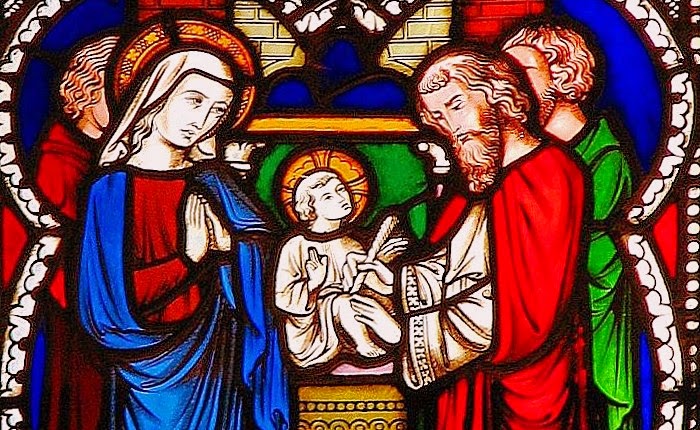 For example, Christians chose to observe (sure to make all males wince), the Feast of the Circumcision on January 1 in place of the revelry otherwise indulged in by those who did not share the faith.

This replacement had varying degrees of success over the centuries, and Christians hesitated observing some of the New Year practices associated with honouring the pagan god Janus.

Once again, (as in the trappings of "Christ-Mass" we see how much of our activity is of pagan origin, based on “works other than grace”.

Theologian Jonathan Edwards, who was brought up in New England Puritan culture,took the writing of resolutions to an art form. But he did not write his resolutions on a single day. Rather, during a two-year period when he was about 19 or 20 following his graduation from Yale, he compiled some 70 resolutions  on various aspects of his life, which he committed to reviewing each week on a consistent basis.

So this year, (for those who make resolutions), why not take a moment to evaluate the inner reasons for making the external changes? Or why not make a list of the “things” that you want to change and then make a value statement as to “why” those changes are needed? According to the plethora of statistics and surveys appearing online, the top ten changes that people put on their list of resolutions are, (not always in this order of priority) :
1.       Lose weight
2.       Save money and get out of debt

3.       Exercise more
4.       Stop drinking
5.       Stop smoking
6.       Change job, get a job, stay in a job
7.       Volunteer or give
8.       Be less stressed
9.       Travel
10.   Spend more time with family
The most rigorous study of New Year's resolutions, conducted by researchers at the University of Scranton, shows a steep drop off in how long New Year’s resolutions stick around. Seventy-seven percent of the revolvers studied made it through a full week, and then 55 percent stuck with their goals for a month. By June, six months into the New Year, only 40 percent of those who had made a New Year's resolution were still sticking with the goal.
Well folks, despite the weighty club that science now wheel’s in the minds of the more enlightened in society (tongue in cheek), may I make an observation? The resolutions that (the above list suggests), are issues relating to “self-control”. These choices (which are well within an individual’s capacity to change), and control with self-discipline. Therefore, many a new year’s resolution is down to three things:
1.       Choice (things rarely change without our decision)
2.       Action (things rarely change without our input)
3.       Discipline (things rarely change without our persistence)
On a final note, any changes that are conditional upon the change in someone else, is sadly out of your control and doomed to disappointment!. Change begins within us, not waiting on the change in someone else. Be the change in the world you want to see, and remember, a new years resolution, is usually one that goes in one year and out the other.   See you on the other side of 2015. 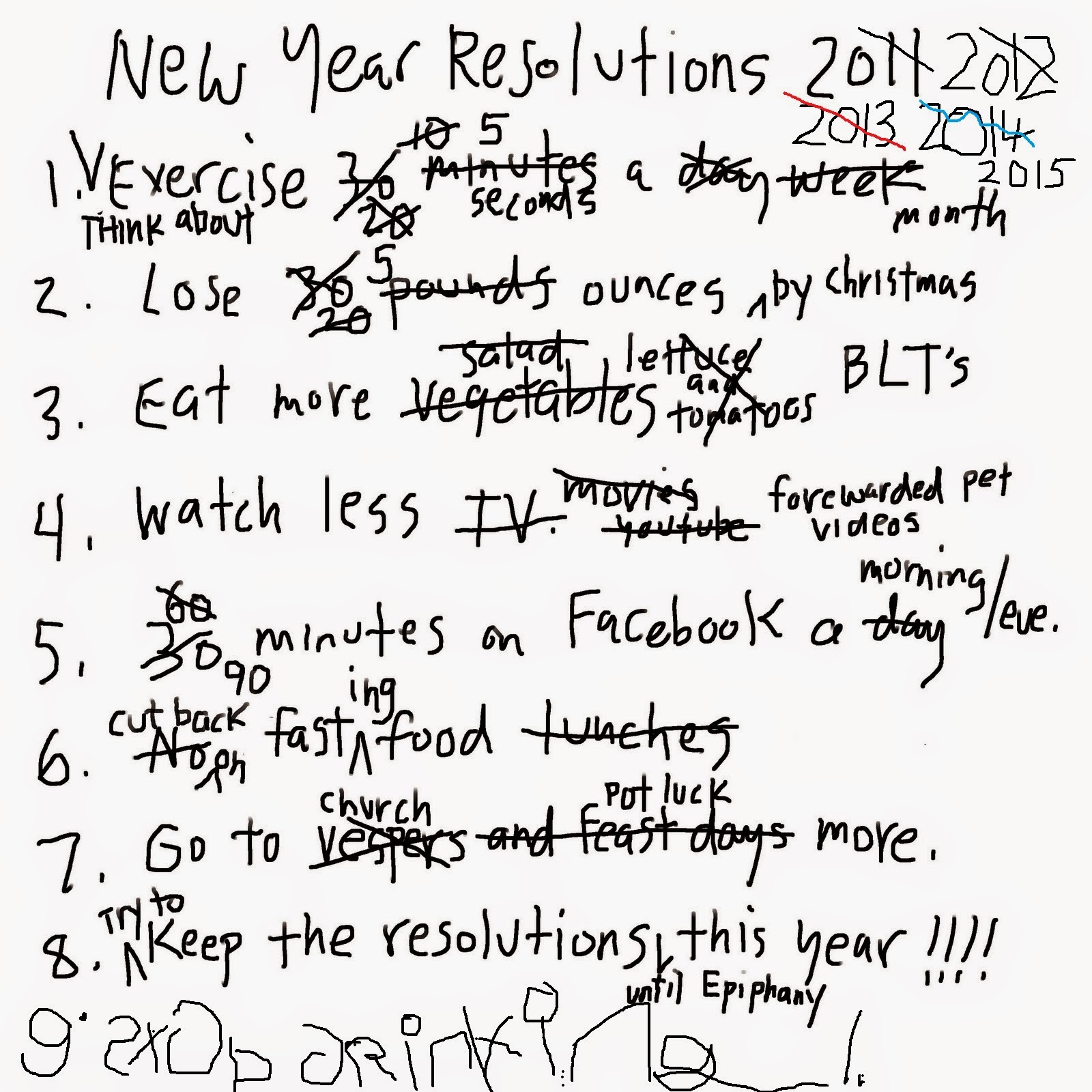