'Fire In The Hole' 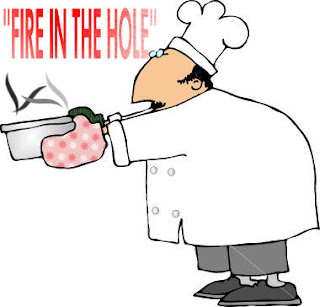 Recently I have been thinking about my early days in the work force. In the days long before the internet, colour TV, and when the only pods we were privy to were pea pods not i-pods. Back in the days when the term uni-sex was unheard of, a mobile hung over a crib and your own mode of transport had pedals. I recall receiving my first transistor radio and marveled at the technology while listening to radio Luxemburg and pirate radio as I drifted off to sleep land.


I was fortunate to be selected from over a hundred applicants for a commis chef position with a prestigious country hotel about twenty miles from my home town. It was frequented and owned by the landed gentry and mobbed most shooting seasons by pot bellied, tweed wearing and gout ridden men with their twelve bore shot guns, deer stalker hats and hip flasks of double malt whiskey. I remember well, walking through their tobacco haze and packs of setters and hunting dogs in an effort to get to the hotel kitchen (from my on-site living quarters) at six a.m. and thinking, so this is what people with money do with their lives.

It was on one such occasion, that I blew up the kitchen and hospitalized two cooks. Not by choice I hastily add! As was my lot, I was on breakfast duty after a late night finish and was tired and weary from a week long week of late nights and early mornings, when I entered the kitchen and began following my usual system of switching on lights, firing up the fryers, lighting the gas stoves, ovens and grills in anticipation of a hectic breakfast shift, which usually began with businessmen always in a hurry to consume copious quantities of bacon, eggs, coffee and toast prior to hooning out of the car park on their way to the next corporate merger.

My first half hour usually consisted of burning at least one tray of bacon and carbonizing a pan of fried eggs whilst my body adjusted the smell of poaching kippers, grease filters heating up and the brewing of coffee from the still room next door. The list of anticipated activities was at times mind numbing at that hour of the morning and it was further complicated, dependent upon the particular waiting staff that were to clock on for duty at seven a.m. On this particular morning, the pace was hectic and several orders arrived prior to the kitchen opening with “In a hurry” written on the docket (as everyone was always in a hurry).

I was just throwing out my first tray of bacon, when one of the cooks turned up for duty and as was always the case moaned about how messy I was and back in their day they would have been fired at best and at worst, whipped and trussed over hot coals. “Ah the good old days.”

“order on!” was the cry from the waitress, alerting me to the fact that the serenity of the hour had gone and I was about to experience something similar to a wildebeest stampede, as the next hour would see a deluge of stressed guests competing for priority waitress service, using every imaginable technique to gain the upper hand over their competitors. At times I would gaze through the port hole from kitchen to dining room and observe these creatures in their native habitat. I often reflected on Richard Attenborough’s wild life series, in particular the dung beetle and would find strange similarities in the observed behaviour. “Bacons on fire!” would be the cry from the cook and tray number two was doomed to the pig bin.
Often we were complemented on our pork (we bred our own animals, poultry and vegetables) and to me it was obvious why the pork tasted so good? In my formative years as a budding chef, I was more focused on filling the pig bin than I was the customer.

The air was now thick with smoke and the aroma of carbon and chip fat, was complimented by the pungent odour of raising bread, porridge and beef roasting for lunch. The second cook had arrived by now and had started making the first batch of scones and other such products for our Devonshire tea menu. The silence had gone now, as I had to endure the two women moaning about their husbands, pay rates, traffic, the lack of visibility in the kitchen, oh and how messy I was. Then it happened. Just like in an old ninja movie. Everything slowed down to a crawl as one of the cooks opened the oven door to put in her first batch of scones. BOOM!

I remember watching this sixteen stone cook being hurled through the air, over the preparation table in the centre of the kitchen and into the fridge. Were I an Olympic swimming judge, I would have had to award 8.5 for dexterity, 9.0 for creativity and a definite 10 for artistic interpretation. It was awesome! Only the Russian judge would have marred the scoring.

I remember the silence that engulfed the place, as I peered over the bench and gazed upon the distraught cook. I remember thinking how quiet she was now. No complaining about her husband or the unfairness of the pay rate. The flash from the stove had singed her hair line, eye brows and the moustache she once had (that always fascinated me), was now gone. There was definite smouldering going on around her uniform and immediately above her head was a sign that said “No Smoking.”

She was no doubt in shock (as we all were), and the silence was now broken as staff from all over the place turned up to find out where the explosion had come from. The manager (whom we all called Fawlty), arrived and immediately made his way to the cook. “What happened?” he asked the cook, (and here’s where the travesty of mis-justice first arose) “He did it” she cried (literally). I mean, come on! Here is a huge woman that was clearly eligible for entry into the Guinness book of records (in at least three categories)’, making such an unproven accusation against my unblemished character (sure, I put my hands up for the bacon burning, but that’s just part of the skill development).

By this time the ambulance had arrived and I had burned my third bacon tray for the day, when the manager pointed out my eyebrows, eyelashes and chef’s hat was shriveled and I had a huge red flash burn on my left arm (which I carry to this day). The cook was hurling abuse at me and threatening to kill me, if she ever walked again. Amazingly her tights had shriveled on the front but were intact to the rear. All the thick black hairs had been removed, (she did thank me later for the best wax job ever). Fortunately, we all came through the event marginally unscathed, the oven doors were re-fitted; I bought the cook a new pair of tights and an eye brow pencil so she could draw eyebrows back on, for special occasions.

I was removed from the breakfast shift, (which I thought was so considerate of the head chef until I found out the morning shift had mutinied and refused to work with me due to fear of a reprisal) and I earned the nickname bam bam!

It seems such a long time ago now, but I can still smell the bacon most mornings and fondly look back on the time when I got two extra weeks holiday, with pay.

PS I am available for weddings, functions and reception work. :)
Posted by Tony